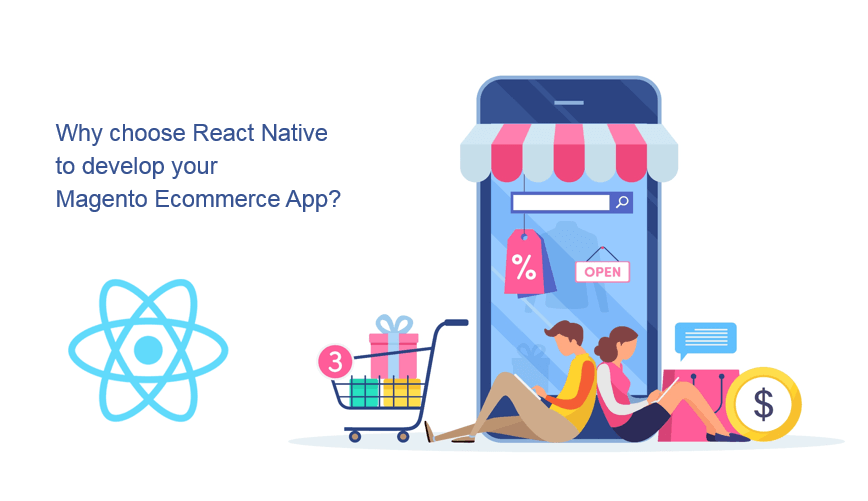 Why Choose React Native to Develop Your Magento eCommerce App

Mobile is one platform that has witnessed tremendous growth in the last decade. Today, businesses see it as the first digital point of contact with consumers.

In 2018, mobile accounted for 52.2% of all web traffic generated across the globe. The statistic doesn’t surprise since consumers spend 86% of their time on mobile on an average with a majority of the time invested in social media and gaming.

Did you know the mobile app revenue is expected to reach up to approx. $190bn in 2020? No wonder, there is an influx of better, faster and more innovative mobile apps given how consumers prefer using those that deliver a flawless performance, have seamless navigation and boast of oodles of aesthetics.

A native mobile app is a powerful weapon for businesses to target and engage their customers. But since the development of an app is an expensive and a time-consuming proposition, businesses are always on the lookout for technologies that can resolve the issue.

And in this age, React Native has emerged to be a viable solution.

Back to basics: What is React Native?

The technology is based on the JavaScript library of Facebook, React that is known to build user interfaces. It was further developed with an aim to develop effective mobile applications with a single code for platforms – iOS and Android.

According to GitHub, React Native is the 14th most popular repository on the platform, with contributors committing approx. 8,000 times in 45 branches with 124 releases.

A recent Google Trends report states the search terms for React Native have surpassed that of Android and iOS development in the year 2018, and that has been the case since 2015-16.

Apps created using the technology not only see fruition quickly but also are easy to debug and perform well on targeted platforms. Popular brands like Tesla, Airbnb, Skype, and Bloomberg have implemented React Native.

Why use React Native for creating Magento native mobile apps

Magento is a self-hosted solution for building eCommerce stores. It gives users the flexibility to scale and pretty much change everything in terms of design, functionality, server environment and security which makes it a hot favorite for eCommerce.

Let us take a practical look at why React Native is the best choice for creating Magento eCommerce apps:

Although React Native was initially introduced for iOS, Facebook realized its immense potential early on and quickly developed the technology for Android as well.

The majority of React Native APIs are cross-platform, meaning if you write one React component, that will work seamlessly on both Android and iOS applications.

You can even embed a native code on your Magento 2.0 native mobile app to contribute a more platform-specific authenticity like design aesthetics.

The functionality reduces the app development significantly and also saves time as the developer doesn’t have to write two codes, which was the case before the existence of the technology.

React Native offers a brilliant experience to developers. For starters, the technology enables them to modify or make corrections in the app while it is running. There is no need to restart the mobile app for the implements the changes in it.

React Native simplifies the iteration cycle which is such a massive part of developing any mobile app. It enables faster loading of pages that ensure higher customer retention and even higher sales, thus making itself a fantastic choice for app development.

Moreover, the time taken to develop a React Native app is the same as that of a typical web app. Who wouldn’t go for a mobile app then?

Any mobile application that is developed using the React Native technology functions similar to a native app. Developers take care of features such as scroll accelerations, animations, keyboard behavior, usability, and others.

The UI created by React Native comprises of efficient native widgets that have made it easier to integrate functions like push notifications, online payment systems, chatbots and more into the app itself.

As mentioned before, JavaScript plays a massive role in this technology, and both together run even the most complicated applications flawlessly. Therefore, if you want to build a robust app for your eCommerce store, go for React Native technology.

JavaScript is used extensively in the React Native technology which any native mobile app developed using the technology doesn’t have to wait for approvals from the app store for updates. The updates can be pushed directly to the users’ smartphones anytime you like.

Not only will your consumers get to enjoy an updated version of the app all the time but also you don’t need to worry about the issues associated with older versions. Moreover, the process of updating a React Native App for Magento 2.0 is easy.

The only catch here is any other update that requires the Native OS and doesn’t include JavaScript will have to go through the standard approval system of the Play Store or App store.

React Native has a massive fan following of developers that is continuously increasing. Why do you ask? For starters, it offers components that are readily available for use which makes the process of building apps much faster.

The viability of the app in the future is hardly a matter of concern for eCommerce stores since Facebook Engineering supports it. That means the framework is continuously under development, and is continually evolving for the better.

Mobile is an excellent platform to attract, engage and retain customers of your eCommerce store. And what better than react Native to help your apps get off the ground for achieving this business goal? The technology is powerful, has immense potential and isn’t going anywhere in the near future. Choose React Native, choose it now.